Living and Learning in Chiswick

The house our English hosts rented for us was a 120-year old three-bedroom Georgian in the quaint, middle-class suburb of Chiswick in SW London, an easy commute via the Underground to my school in South Kensington. While decidedly trendier and more upscale today, in 1980 the neighborhood had far fewer tourists, no boutique shopping, and no cutting-edge fusion restaurants. It was a lovely area of teachers, bus drivers, salesmen, and pensioners.

We quickly made friends with colleagues at work and were soon invited to dinners, movies, and parties. To repay their many kindnesses we threw a Fourth of July BBQ bash at our home complete with red, white, and blue streamers; hamburgers; potato salad; and a build-your-own banana split bar. It was a huge success as it seemed that my Imperial College colleagues were just as eager to learn about American traditions as I was to learn about theirs. The kids played in the local park, met neighbor children, and, as so often happens, this led to us meeting their parents, adding more names to our growing London social directory. We attended a nearby synagogue for Saturday morning services, were introduced to congregants, and in a short time became part of the local Jewish community, further choking our already-packed dance card.

Although England is not exactly an alien culture to Americans, my wife and I were experiencing new ways of doing things daily. We learned to shop like Brits—instead of a one-stop “Gonzo-Mart” for our food needs, we hauled our reusable straw bags (a new concept in the pre-green days of 1980) to the neighborhood butcher, greengrocer, fishmonger, baker, and dairy store. We chowed down on great Indian and Pakistani cuisine, common in London (their equivalent of neighborhood Chinese) but a bit of a rarity in 1980s Minneapolis. 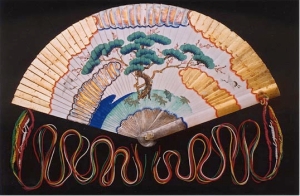 Rare Japanese Fan At the British Fan Museum. One of Our Many Enjoyable Day Trips During The Stay in London

With three months, rather than three days or three weeks, to explore this sprawling metropolis we had time to see not only the “biggies” of the English tourist scene—the British Museum, Hyde Park, Buckingham Palace, Tower Bridge, and the Royal Observatory—but also to discover some oft overlooked sites and hidden gems, such as the British Postal Museum and Archives in Islington and the quirky but fascinating Fan Museum in Greenwich with its collection of over four thousand fans, some dating to the tenth century (see photo).

There were also days when we would not go anywhere but, instead, stay home, read a book, play board games with the kids, take a stroll along the Thames River only a few blocks from our house, and head off to bed at an early hour. This relaxed pace of sightseeing is one of the great benefits of a working vacation, and it leads to a far more manageable and enjoyable life-style than the all-day, every-day hustle and bustle of your typical family holiday.

I was quickly coming to understand and appreciate the personal, professional, and cultural benefits of a short-term overseas working vacation.   That summer in England was both my epiphany and my conversion.

My first working vacation was in 1980, and it came about as many of these first overseas experiences typically do–it fell into my lap.  I met some teachers from Imperial College, London at a professional conference.  They were working in the same area as I, and we had a lovely chat over lunch. We exchanged business cards and agreed to “keep in touch.”  Little did I realize the significance of those throwaway words.

Six months later I received a letter.  They had been awarded  a grant to bring a visitor to London for three months during the summer hiatus, and they were inviting me.  They would pay my airfare, housing costs, and provide a small monthly stipend.  All I would need to do is pay airfare for my wife and children.

Sounds great, right?  Well not to someone who had never traveled outside the continental U.S.  The idea of going to London was a lot to digest; the thought of actually living there for the entire summer was overwhelming and, to be honest, rather scary. I had a wife and two young children, a home, two cars, a lawn, and a garden. I was in a bowling league and played poker on Monday night.  You don’t just pick up and leave such pressing responsibilities behind. Or do you?

My fears kicked into high gear and I began to spew out arguments why this crazy idea could not possibly work. Who would care for our house? What about my quest for tenure? How would we pay the bills? How could we disrupt the kids’ lives? What about Aunt Edith’s seventieth birthday? My wife, far more footloose and adventurous than I (she traveled to Europe on her own the year before we were married) had a simple rejoinder for each: We can rent the house to responsible adults; Imperial College is a world-class school; the kids can play with each other and will quickly make friends; we can phone Aunt Edith on her birthday. All her arguments were thoughtful, reasonable, and logical, but in the end only one truly swayed me: “Dammit, this will be an adventure. Let’s do it!”

The biggest stumbling blocks to taking that first working vacation are the nagging doubts and fears that you can actually pull it off.   Right now many of you are probably doing exactly what I did all those many years ago—conjuring up a gremlin’s litany of imagined worries and problems.  You are convincing yourself  that your situation is quite different, and it would be impossible to get away from home this year and, most likely, the next. After all there is your elderly mother, the kid at Camp Potowotamie, coaching the soccer team, teaching summer school. 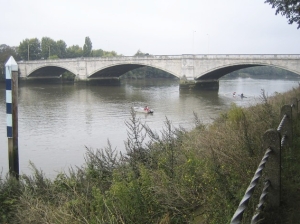 One thing I have learned during my years of travels is that there is never a shortage of reasons to explain why a chance can’t be grabbed, an opportunity can’t be seized, or an experience can’t be lived. I would never dream of attempting a rejoinder to each and every excuse you might choose to present. Instead, I simply paraphrase my wife’s final and most persuasive argument made to me all those many years ago: “Dammit, it was an adventure.  You should go!”